Crafting Lives, Reviving Legacy
Project Virasat is an umbrella organisation that aims to revive the age old craft-forms of India. We started our journey by establishing P-TAL in an effort to revive the dying art form of handcrafting copper and brass utensils using hammering techniques, by mobilising artisans and providing them access to organised credit, contemporary designs and better demand avenues. Now, we plan to make Project Virasat a launchpad to provide opportunities to millions of craftsmen across India who are currently struggling to carry on their craft.

‹ ›
Visit our project site at : www.projectvirasat.com
Our sustained venture: www.p-tal.in

The Craft Sector has always been the pioneer in displaying India’s deep tradition, the vast geography and rich history in a true sense. With beautiful designs, India’s Artisans carried a legacy of their land, culture and carved their art into forms that can be forwarded to generations. However, with industrialization, modernization, and mechanization, many craft forms have become extinct or are on the verge of dying. In order to preserve the Craft sector, India’s Untapped, ‘Made In India’ Goldmine, we gave birth to Project Virasat which is an umbrella organisation to revive the struggling craft forms of India in a sustainable manner. Project Virasat aims to uplift these craft forms in all possible aspects to maintain the dignity of the artisans, creating opportunities not only for them but also for their future generations that can safely carry on the craft form.

Virasat’s glorious journey had humble beginnings in Jandiala Guru, a small village in the city of Amritsar known for India’s only UNESCO listed craft form - The Thathiar craft of making brass and copper utensils by hammering. Despite such recognition, the legacy which started 150 years ago with 500 artisans was reduced to a mere 30 because of problems like, internal Conflicts amongst the Thatheras, outdated designs and lack of access to markets due to exploitative middlemen

In order to solve these issues, we, at Enactus SRCC initially, with the help of the District Administration of Amritsar, unified the thatheras into an SHG(SELF HELP GROUP) named Punjabi Thathera Art Legacy abbreviated as P-TAL, under which our products are also sold.

Development of contemporary designs keeping in mind the traditional superiority, provision of finer tools, and upskilling of the artisans through training workshops by noted craft researchers and industry majors has led to increased market demand for the products of the Thatheras. Also, our efforts to ensure sustainable access to demand avenues for the Thatheras have been realised through the setting up of our own retail outlet in the popular tourist destination of Gobindgarh Fort in Amritsar, having a presence in numerous high end-retail outlets across India including Taj Khazana in Bombay, Ishatvam in Goa, Gully 39 in Delhi, Jaya He at Mumbai International Airport and numerous other prestigious places.

We are currently listed on all major e-commerce platforms including Amazon, Flipkart, Etsy, and also have our own website www.ptal.in which not only serves as a platform for purchasing our products but also provides insight into the social impact made through P-TAL.

We have been invited by the Italian and Australian Ambassador to display our products as a part of the Italian Design Week and a Culture event, respectively. In addition to it, our work was presented in the UN Estate Office, owing to our rigorous efforts for the sustained revival of the Thathiyar Craft. The success achieved in the local market was the major factor that made us tap international demand avenues. P-TAL now has a presence in more than 11 countries and is moving forward to become a global brand with a goal to give international recognition to the Thatheras.

These sustainable efforts have led to us being awarded the much regarded World Trade Centre Award for Innovation and Impact. The unique craft of Thatheras of Jandiala Guru in Amritsar is the only craft form of India to be inscribed on the UNESCO List of the Intangible Cultural Heritage of Humanity in 2014. Designs are uniquely made by skillfully hammering a series of tiny dents into heated brass metal. It was due to our sustained efforts that the craft form was relisted on UNESCO's list of Intangible Cultural Heritage.

The greatest obstacle we face in any endeavor is the "challenge of where to start and the challenge of when to stop." After nurturing the foundations of P-TAL with a belief to make our Thatheras world-renowned, we have made sure that the Thatheras are capable of carrying on their legacy, as self-sufficient entrepreneurs. A team of full-time professional management individuals has been set in place to assist our Thatheras which provides a conducive ecosystem for the sustainability of our project. Kirti Goel, our lead designer is ensuring centralisation of operations from Chandigarh with the new team.

For the long term, we plan to make Project Virasat a launchpad to provide opportunities to millions of craftsmen across India who are currently struggling to carry on their craft.

Seeing the profound impact and replicability of our model in the sphere of crafts, we were invited by the Ministry of MSME to implement the scheme of SFURTI, a flagship project launched for crafts languishing due to lack of recognition, innovation, low-income status, and insufficient infrastructural facilities. We have entered into a strategic alliance with renowned organizations like Saath and Khamir, working towards the holistic development of numerous crafts in Kutchh nexus eclipsing all the major craft forms of Gujarat like Tangaliya and Leather crafts.

We have also intervened in 2 craft clusters with a tailor-made solution for each of them. We narrowed down to these craft forms because of their fading relevance from the Indian handicrafts market and the dwindling nature of its demand.

Pichvai Painting:
Pichvai Painting is one of the most ancient forms of art which was created depicting the beautiful life of Lord Krishna with its roots in Nathdwara, Rajasthan.
This traditional art is fading away from the mainstream due to losing their originality because of the forgery of designs and lack of awareness.

We envision a 3-Phase development project including:

1. Preservation and documentation of the artist's original paintings
2. Market linkages and branding
3. Development of the town of Nathdwara as a heritage site

Gaurahari Stonework
The artisans in Gaurahari village of Mahoba District practiced once a thriving and renowned craft of Gaurahari Stonework, wherein they made a wide range of handicrafts, out of a particular coloured stone called 'Gaura Patthar', known for its soft texture.

However, due to the failure of any sustained intervention, lack of demand avenues, and rigid government norms on mining of Gaura Stone, they have nearly lost hope of any future for their craft. We plan to sustainably intervene in this craft cluster by providing access to the raw material from distant areas and simultaneously establishing market linkages for these craftsmen.

The coming-together of government organisations, implementing agencies and Project Virasat strive to impact 2000+ craftsmen with efficient utilisation of monetary resources ranging from 5-10 crores.
Project Virasat serves as an example of how a dedicated organisation thrives on breathing life into long-forgotten crafts by nurturing the lives and amplifying the potential of India's Artisans.

Goals and Objectives of Project Virasat

To preserve our cultural heritage and revive the traditional craft forms

To promote the culture and uniqueness of various craft forms

// The Community and the Business Model

The Thatheras of Jandiala Guru possesses a legacy that can be traced back to over 200 years ago when the village was established as a colony of craftsmen during the reign of Maharaja Ranjit Singh. The community produces handcrafted copper and brass utensils using the traditional technique of hammering. But, exploitation at the hands of a Kasariya (middleman) and lack of stable incomes due to reduced demand for copper and brass utensils (due to the onslaught of steel and aluminium products) had forced these traditional craftsmen to seek employment in other domains, thus resulting in the decline of the art form.

The ones who remained had to work as mere labourers in dingy, unhygienic cells with no electricity, exposed to risks of hearing impairment and other health hazards.

1. Institutionalisation:
When we first arrived at Jandiala Guru we discovered that there was a lack of ownership amongst the Thatheras, the number of families involved in this craft had reduced from 500 to 30. Additionally, the Thatheras were exploited by the Kasariyas (Middlemen). We, therefore, organized them into a self-help group, known as P-TAL (Punjabi Thathera Art Legacy), which not only institutionalised them but also provided us with a name with which we could associate ourselves.

2. Training and Development:
The issue of reduced demand was addressed by having professional designers on board who have trained the thatheras so that they can come up with the best handcrafted products. Initially, Thatheras created conventional products like plates and glasses which had no demand due to lack of design innovation. But, through our collaboration with professional designers and our training and development sessions, we came up with 43 new designs, all of which were suited to contemporary needs.

3. Integration with suppliers:
Once we sorted out the design problem we worked upon the supply side, i.e integrating the suppliers.
Under this process, firstly, the procurement of brass and accessory materials is done. In order to ensure the best possible quality of raw materials, we source them from Jagadhri, a place well known for its high-quality copper and brass sheets.

4. Employment of a Supervisor:
A supervisor is employed to ensure a smooth flow of operations. The supervisor procures and distributes raw material to Thatheras, checks the quality of every product, and ensures correct and proportionate distribution of the remuneration.

Demand is met both individually; Households, Online Orders and Recurring Professional Clients and by Bulk Demand; Hotels, Restaurants, Wholesalers, Exporters and Retailers. Along with this, we also participate in exhibitions such as Pitex, Dastkar, IITF, Dilli Haat, etc. 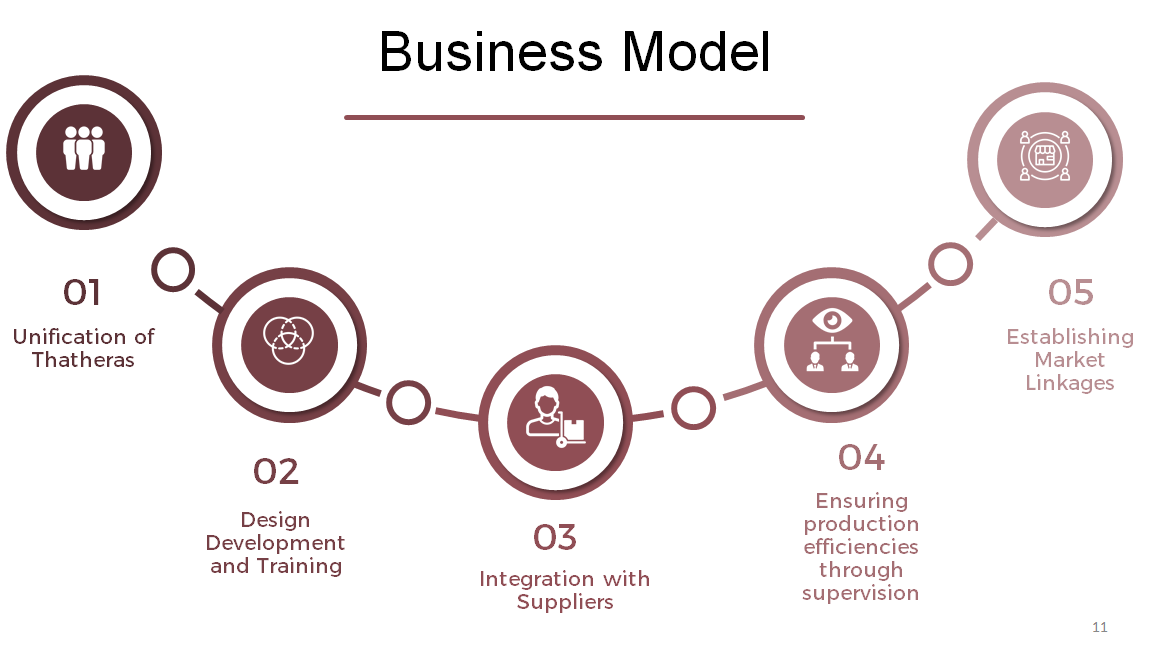 Development of contemporary designs, provision of finer tools, and upskilling of the artisans through training workshops by noted craft researchers and industry majors has led to increased market demand for the products of our Thatheras. Higher revenues through impressive sales being realised through these demand avenues and increased profitability in niche markets have led to a substantial increase in regular incomes for Thatheras. In addition to this, the support of the Punjab Government has enabled access for the Thatheras to grants worth Rs. 10 lakhs each year for the next four years.

In monetary terms, the income of the Thatheras has increased by about 315% per month, from an initial 6000 Rupees to 25000 Rupees due to the rising demand that we have created.

The craft form of the Thatheras in Jandiala Guru is revived with increased interest being shown by traditional craftsmen of the village who had chosen other professions, to get back to making handcrafted utensils again. The rejuvenation of self-esteem can also be linked to the unified legal existence the artisans now enjoy, in the form of an SHG, a society, and an Udyog Aadhaar. Besides, our efforts at upskilling the craftsmen through workshops by noted craft researchers and industry heavyweights are also improving the social standing of the Thatheras. The Government’s proposal to sponsor the promotion of the craft as a signature craft of Punjab shall further motivate the craftsmen.

P-TAL understands that a hand for our communities should be matched by a step towards our environment, hence, we plant a tree for every 10 products sold as a measure towards sustainability. In order to make sure that the growth of the brand is accompanied by a growth in our eco-friendly initiatives, we make use of sustainable packaging for our products.

Having provided international exposure to the craft by enabling export opportunities with the ultimate goal to make our Thatheras world-renowned, we have now made the Thathiar craft sustainable and receding our intervention to mainly improving their working conditions. Now, we aim to realise the objective for which Project Virasat started, to take up and revive multiple craft forms under threat in India with the invaluable experience we have learned from P-TAL.

Transforming the artisans from mere labourers to respected craftsmen